As a conscious and responsible participant of the green transformation, we are conscientiously confronting the challenges imposed on KGHM Polska Miedź S.A. by the changing regulatory environment and the resulting obligations with respect to the climate impact of the Company's operations and the impact of climate change on KGHM.

On 16 November 2021, the Resolution of the Management Board on the acceptance for application of the Climate Policy of KGHM Polska Miedź S.A. was adopted - a document defining the Company's ambitious goals with respect to greenhouse gas emission reductions over the 2030 and 2050 time horizons, as well as the scope and degree of changes necessary to achieve these goals. 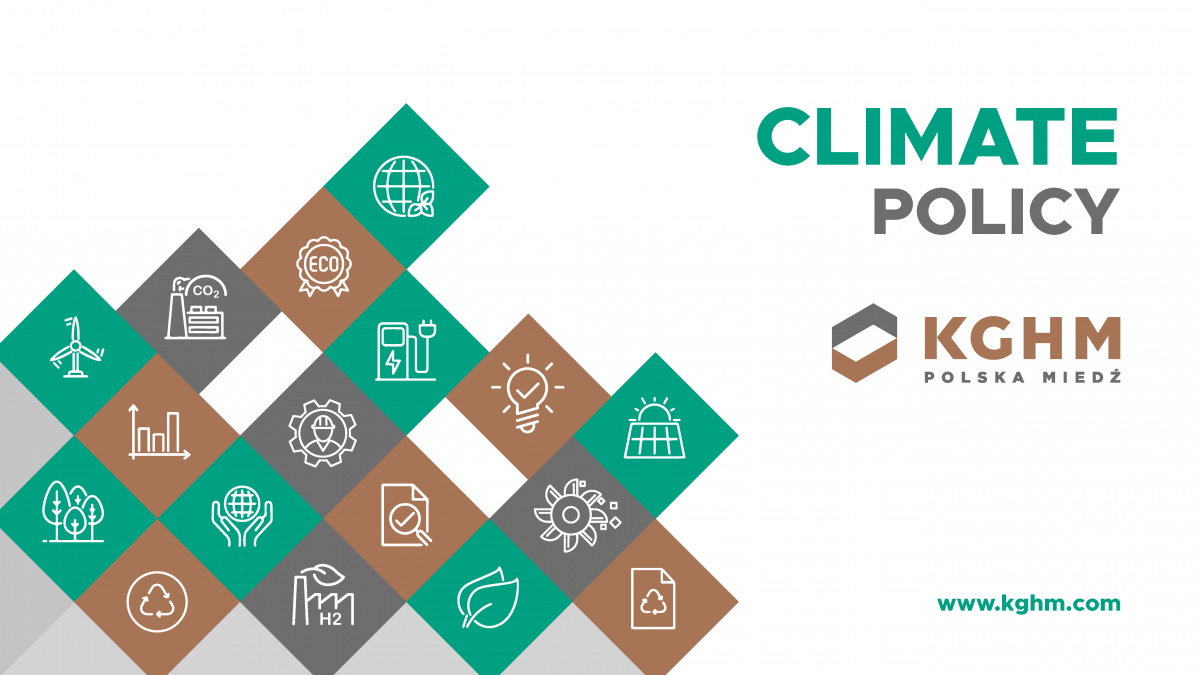 Decarbonisation Programme of the KGHM Group

What will the development and implementation of the Climate Policy bring to the company?

Due to the development and implementation of the Climate Policy, KGHM Polska Miedź S.A:

How was work on the Climate Policy carried out?

The Resolution on the adoption of the Climate Policy of KGHM Polska Miedź S.A. was the culmination of work which – in accordance with the announcements contained, inter alia, in the Non-Financial Report for 2019 – had already been conducted for over two years.

The comprehensive regulatory and strategic analyses initiated at the time demonstrated that the European community's climate ambitions would have a key impact not only on the environment, but also on the company's competitiveness in international markets and on production economics. At the same time, all information and data related to greenhouse gas emissions issues were collected, aggregated and processed. All of these actions made it possible to estimate the scale of the project and create a preliminary work plan for it.

In the subsequent phase of work we were supported by the project consultant Ernst & Young sp. z o.o. Consulting sp. k. The company is the Polish representative of EY, one of the world's largest providers of consulting, audit and risk management services.

It was inaugurated by a special workshop, during which senior managers were able to become acquainted with the conditions for implementation of the project, the schedule of work carried out during the project, and the role of individual organisational units in the entire process.

This phase was implemented in a project format, consisting of an Operational Team and a Steering Committee that reviewed the work of the various work streams. The project structure and personnel were identified under an order of the President of the Management Board concerning the development and implementation of the Climate Policy of KGHM Polska Miedź S.A. Each work stream of the Operational Team consisted of a group of several to as many as several dozen people, representing both management staff and experts in particular areas of the company's and the Group's operations.

Streams were dedicated to issues related to different aspects of the project - from direct emissions issues to topics in the areas of management and communication.

The company's existing emissions calculation process was reviewed and a target optimal emissions data reporting scheme was identified. KGHM's climate objectives were also set and initiatives and measures to achieve these ambitions were identified, and the main regulatory trends and related conclusions for the shape of KGHM's Climate Policy document were outlined. In a further phase of work, a scenario analysis of climate risks and the assessment of the sensitivity of the business model to climate change issues was carried out. The Company's ESG ratings were also reviewed, and measures were planned to improve the position of KGHM Polska Miedź S.A. in this area. In order to properly integrate climate issues into the company's operations, a proposal for changes in processes and procedures was also developed (in line with TCFD recommendations) and a structure and roadmap for the implementation of the Climate Policy was designed.