The deposit mining technology at KGHM Polska Miedź S.A. mines is based on in-house solutions developed in the course of the mining activity to date and combines technically advanced basic aspects of mining production, i.e. mining and transport, with maintaining the stability of the workings.

All elements of the production process are adapted to:

1. local conditions of deposition of deposits, including:

2. occurring natural threats, including the following threats which were and continue to be predominant during the individual stages of mining development:

The mining of copper ore and its delivery to the ore enrichment plant is associated with the following technological operations: 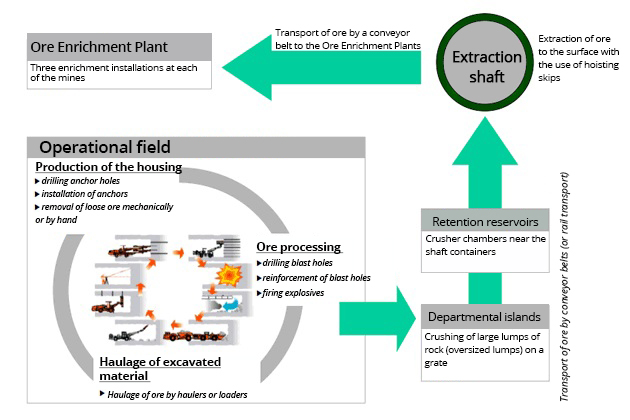 Only the room-and-pillar mining systems are used at copper mines of KGHM Polska Miedź S.A. In these systems the body of the deposit is cut by the rooms and strips with separated technological pillars, which as a result of operational pressure are destroyed and switch into post-critical operating mode. The pillars separated in this manner work in the mining fields in respect to post-destruction carrying capacity in a similar to how the yielding chock support works. The technological pillars with their appropriately high carrying capacity allow maintaining the stability of the roof, while at the same time reduce the development of stratification of the direct roof and its excessive settlement in the working space of the mining front. The appropriate supporting capacity of technological pillars is achieved by appropriate selection of their dimensions and slenderness adapted to the local conditions of deposition of the deposit and strength properties of the rock mass. The basic varieties of the roof-and-pillar system with mined roof bending of the small and medium thick deposit now concern the systems with the liquidation of the extracted space by bending the roof on residual pillars left in the abandoned workings. The mining systems with hydraulic backfilling, on the other hand, are used in the mining of the parts of a thicker deposit or in areas requiring protection of surface structures.

The double-layer varieties of the roof-and-pillar system with liquidation of the extracted space by sand backfilling transported hydraulically, are used to mine deposits more than 7 metres thick. The varying strength properties of the rocks of the mined deposit and the roof result in the extraction of the layers from top to bottom. In this situation the roof of the preparatory and production workings is located in strong carbonate rocks. The bottom layer is made available by the inclined drifts from the floor of the upper layer. The thick deposit mining methods are also characterised by high differentiation associated with the local geological-mining conditions. The backfilling of the extracted space has a positive impact on the operation of residual pillars in the abandoned workings, increasing their supporting capacity and reducing the deformation of the roof and thus the extent of its settlement and impact on the surface.

The (various types of ) room-and-pillar systems developed in the course of mining to date, specifically in respect to deposits of medium thickness, were adapted to the local conditions of deposition of the deposits enabling maintenance of the assumed production capacity of the mines and minimisation of mining losses. The technology for thin deposits has also been developed, which would allow optimising the size of the mined deposit and ensure appropriate waste rock management. These activities result in: