Home / Media / Awards / KGHM - The Pillar of the Polish Economy

KGHM - The Pillar of the Polish Economy

Our company has been once again honoured by the editorial team of the Puls Biznesu newspaper. 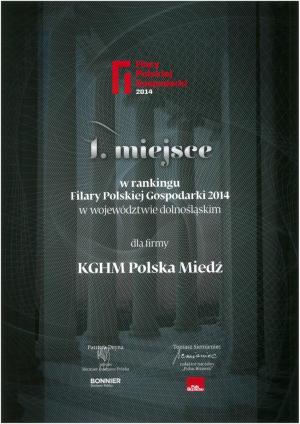 The Pillars of the Polish Economy is a ranking prepared annually by the Puls Biznesu newspaper and a research agency. The winners are selected by local government officials, who evaluate the companies in terms of the taxes they pay, the number of employees, HR programmes addressed to students and disables people, as well as social activities for the region and its residents.

It is the first Polish catalogue of large companies that play the leading role in individual voivodeships and local government officials who manage their regions in a way that sets an example to follow.

The companies named the Pillars of the Polish Economy are characterised by stability,  contribute greatly to the development of the region as employers, support and promote employment, stimulate the development of entrepreneurship and are involved in activities for the development of the local community. Puls Biznesu wants to reward activity and dynamism, as well as ties with local communities. This is where we see the strength of the Polish economy - in the flawless combination of entrepreneurship and self-government - explains the editorial team of the Puls Biznesu newspaper.

The Pillars of the Polish Economy ranking, and the list entitled Local Government Manager of the Region within the same framework aim at honouring companies and local government officials from individual voivodeships. The winner in the Lower Silesian Voivodeship was KGHM, other companies on the podium were Polska Grupa Energetyczna and Toyota.

The award was received on behalf of KGHM by Marcin Chmielewski, the Executive Vice President.